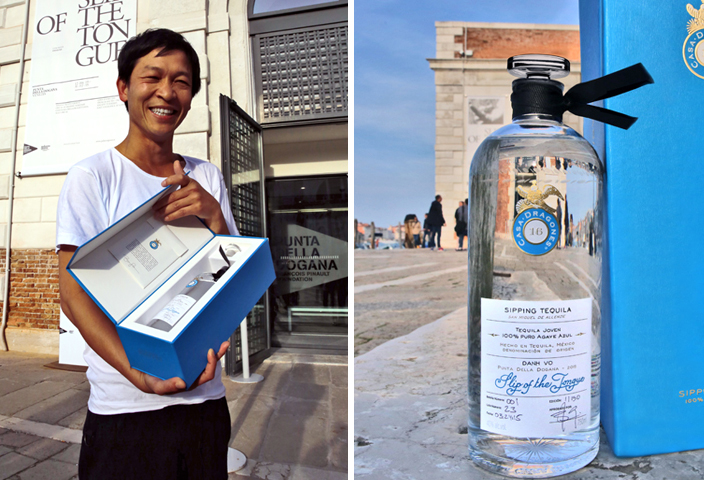 Casa Dragones is thrilled to announce our collaboration with the internationally acclaimed artist Danh Vo, in two Special Edition bottles designed especially for two unique exhibitions surrounding the 2015 Venice Biennale. Both Special Edition bottles feature calligraphy directed by the artist, and executed by the artist’s father, Phung Vo, whose elegant calligraphy is prevalent in Vo’s art.

According to ArtNet News, “when Danh Vo was asked to be the first artist to curate an exhibition at Venice’s Punta della Dogana (run by the Pinault Collection, as is the Palazzo Grassi), his first thought was tequila.”

To celebrate the Special Edition and the exhibition opening, Casa Dragones Joven was poured at the sensational dinner hosted by Francois Pinault in honor of the artists and curators. The dinner began with glasses of Casa Dragones being served at the magnificent Hotel Bauer, where Mexican craftsmanship met Italian sophistication while overlooking the incomparable views of the Punta Della Dogana. Late night revelry continued as artists, collectors and newly-inaugurated European tequila lovers enjoyed their first time with Casa Dragones.

The first exhibition, Vo’s Slip of the Tongue at Palazzo Grassi – Punta Della Dogana – Pinault Collection, marks the first time an artist has been selected to curate for Punta Della Dogana in Venice. The second exhibit will be at the Venice Biennale’s Danish Pavilion, where Vo is the featured artist.

For this first Special Edition, 150 Casa Dragones Joven bottles have been hand-inscribed with the exhibition title, Slip of the Tongue, uniting each untitled piece under the umbrella of Vo’s curated collection, in collaboration with curator, Caroline Bourgeois. Special Edition bottles are available in Punta Della Dogana – Pinault Collection museum store. They are also available exclusively through Casa Dragones Concierge. For information, please contact [email protected]

The origin of our collaboration is both remarkable and fitting. Danh Vo, who was born in South Vietnam and later settled in Denmark with his family in 1979, has recently chosen to reside in Mexico City, and shares a passion for Mexico that extends to Casa Dragones. We are honored and thrilled to be part of the artistic curation of the Venice Biennale 2015.