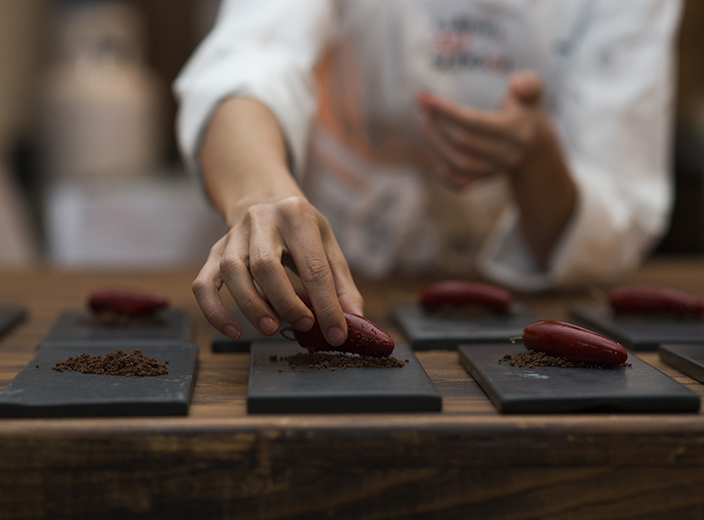 Mexican chef Matteo Salas prepared a beautiful 5 course Pairing Table Dinner to culminate the official opening celebrations of Casa Dragones Tasting Room. The meal, served to a group of 30 guests seated together at a tastefully rustic wooden table, included an array of dishes that were designed to pair perfectly with Tequila Casa Dragones Joven. Held in a recently converted portion of the Dos Casas Hotel, this celebratory Pairing Table Dinner was the very first event to take place in what has been named the “Dos Casas Garage,” and proved itself to be a minimalistic and innovative event space.

After each guest had taken their seat around the table, the first of Salas’ two cold dishes were served. Plates with creamy oysters topped with scallions and pickled beets were placed at each setting, and the evening’s meal was officially underway. Oysters have become a favorite amongst chefs who pair their meals with Casa Dragones Joven as the lingering saltiness from the ocean and texture of the meat balance well with the soft notes of pear that can be detected in Casa Dragones Joven. To harmonize with the 100% Blue Agave Tequila, Salas’ next dish included tender tuna belly served with sea urchin, capers, avocado and citrus.

As guests finished the last of the evening’s cold plates, Salas switched gears and prepared to plate the first of the night’s warm dishes. His third and final seafood dish included squid prepared in toasted butter and lemon before moving on to the night’s main entree of crispy pork with swiss chard, sweet potatoes and gastrique. His fifth and final dish was a dessert plate in which he treated guests to a lemon, coconut and vanilla burnt meringue.